With the blessing of England Hockey, 13 players, two coaches and the mascot Notorious from Jersey Hockey’s Boys U16s squad set off to the UK to play-off against Beeston HC for the National Championship bragging rights.

As South of England Area Champions Jersey were being hosted by the famous Beeston Hockey Club in Nottingham, as North of England Area winners. Midlands champions, Hampton, declined to take part. The venue was the brand-new pitch at the impressive Trent College, Nottingham. Both clubs had agreed to use the players from last season who had won their respective Areas.

Understandably, both teams started nervously but the ‘Jersey Boys’ settled into their rhythm quicker and began to dominate. Ten minutes in and a Jersey attack down the right was started by influential Jersey central midfielder Jamie Watling. A quick ball to wide attacker Mattie Jones was then fed into a dangerous area of the Beeston D and striker Ethan Toudic reacted quickly to get a goal-bound touch. Initially saved by the keeper, the ball took a deflection off a defender and agonisingly crossed the line – just. Toudic rightly claimed the goal.

Beeston had some skilful players but so did the reds and the Jersey side were playing the better team hockey. A couple of Beeston attacks were thwarted with good tackles and interceptions by Jersey defenders Paddy Gouge and Dylan Kotedia and the back line was being well-marshalled by captain Robbie Forrest, with Jersey keeper Henry Dawson being largely untroubled.

When Jersey attacked, they did so with pace and intelligent movement and they were causing Beeston many problems. Jersey doubled heir lead on 20 minutes following a fast break by Toudic and the dangerous Blake MacRae. Clever interaction between the two in the Beeston D found Toudic with a simple tap in at the far post.

The Caesareans continued to dominate with midfielders Chris Thomas and Ned Crosby putting in imperious performances and great teamwork led to Jersey’s third. A break and defence-splitting pass found the speedy MacRae bearing down on the Beeston keeper one-on-one. The keeper came out, dived, and took out MacRae. The umpires converged and the outcome was just a penalty corner when perhaps a penalty stroke might have been the right call. It actually didn’t matter because Jersey’s well-rehearsed penalty corner routine saw a powerful drag flick from Watling smash into the backboard.

One minute before half-time Beeston won their first penalty corner but this was well defended when Jersey’s Aidan Boyle, who was having an influential game at right defence, bravely deflected the drag flick attempt wide of Dawson’s goal.

Turning round three goals to the good, the Jersey coaches Dom Pallot and Simon Watling were keen to impress that the job was only half done and to expect a reaction from Beeston, but this didn’t materialise. The Jersey team, with good work from defender Oli Flemmer and attacker Robbie Mossop, were keeping the ball well and neutralising any Beeston threats. This included another superb piece of No 1 running at penalty corner defence when Boyle picked off another potential Beeston attempt. Somewhat against the run of play, Beeston fashioned an attack down their right and the ball found its way to the top of the Jersey D, where a strong reverse stick shot went in despite Dawson’s best efforts to keep it out.

Fearing this would give Beeston some confidence the Jersey team were undeterred and immediately got back to work and within two minutes effectively made the game and National Championship safe by restoring their three goal advantage. A fast attack with good close skills from Toudic had won Jersey a penalty corner and ‘Right Nugget’ worked a treat as MacRae deflected in a very well-worked set-piece goal.

With fifteen minutes to go, the skilful Watling won another penalty corner, then himself eliminated the Beeston no. 1 runner, before unleashing a raised drag flick which hit a defender on the goal line. Watling stepped up to convert the resultant penalty stroke with a well-executed low flick which gave the Beeston keeper no chance and Jersey had a 5-1 lead.

Comfortably in control, Jersey saw out the last few minutes, with Dawson making a good save from a Beeston strike and Jersey’s MacRae hitting the post with a strong shot from a narrow angle. With more clinical finishing created from their dominance, Jersey could have won the match by a greater margin but the players and coaches were very pleased and happy to have played well against a useful team and to have finished the campaign as National Champions.

Dom Pallot (Manager/Coach): ”What a fantastic end to a wonderful extended season with this group of young hockey players. They have developed so well over the months under guidance from Bill (Aston), Paul (Le Bihan) and Simon (Watling) and to witness such mature performances for lads of this age, specifically in the Area final against Surbiton and today against Beeston, is great to see for Jersey Hockey.

Lead coach Bill and coach/umpire Paul were unable to travel but they have been so involved with this squad throughout the season and they would have been so proud of today’s performance and result and ultimately the season’s honours.” 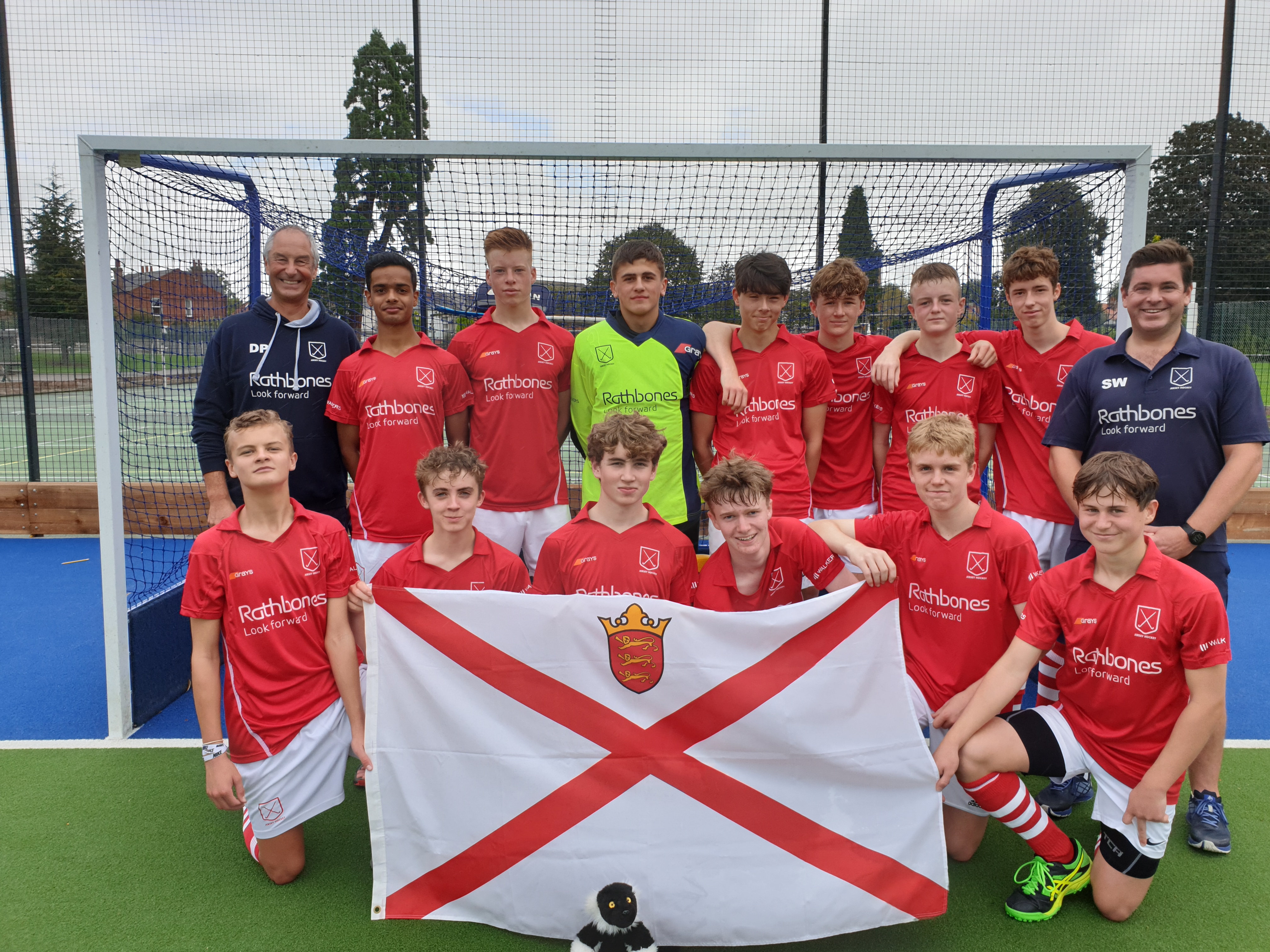