After a shaky start Jersey settled into the match and nerves were well and truly settled when Joe Gower surged up the right wing and sent a great cross towards Theo Pirouet who duly converted.  Soon after Pirouet's match was over as a recurrent injury got the better of him.  Guernsey pressed the Jersey defence for a period but it was Jersey who prospered next as some excellent work from Samuel Reynolds from midfield saw him pick out Ben Heelis who calmly flicked the ball over Tristan Pleasant in the Guernsey goal.  Cruelly Reynolds was also ruled out of the game through injury causing Jersey's coaches to rejig their structure.  Guernsey were next on the scoresheet with a goal from Oliver Clapham.  However, Jersey continued to press and influential midfielder, Joe Gower, was next on the scoresheet with a savage hit from the top of the circle giving Pleasant no chance of a save.  Jersey scored one more before the break as the forward pairing of Joe Austin and Heelis saw the former find the latter in front of goal for another calmly taken knock in.  There was no let up for Guernsey after the break and this time it was Jersey's captain, Will Hodgson, who dealt them a blow as he selected a straight shot from a penalty corner which once again had Pleasant beaten.  A rare lapse in discipline saw Guernsey score from a short corner late in the game through George Le Roux but the trophy was already in Jersey hands and they ran away 5-2 winners giving them not only the Inter Insular trophy but a valuable 3 points towards their England Hockey Championships' campaign.

Coach Sarah Heelis said "we are delighted with the boys' performance today, they really played as a team and did us and themselves proud.  They are an excellent group of boys to coach and we now look forward to two more matches in the UK on 2nd February".

The match day started with promise in the air. Bright, sunny and barely a breath of wind masking the early morning winter chill. Asked to arrive at Les Quennevais for 9:30am, the girls assembled in the changing room and proudly dressed into their red Rathbones Jersey Island Hockey shirts looking forward to the day ahead. An 11-a-side Inter-Insular match followed by further mixed matches later in the day.

After a brief warm-up, the days tactics, some points of play and encouraging words were imparted by the Coaching crew, Neil Merritt and Dom Pallot followed by the girls experiencing (surely for their first time ever) running onto the pitch in single file hearing their names being called out through the Clubhouse sound system. Just like International players. Fantastic. Naturally comments from one or two of the more outgoing girls were along the lines of “where’s the spotlight” and “should I walk slowly and wave”. Clearly self-consciousness hasn’t set-in yet….

After the formalities and photo opportunities, both teams lined up to begin. Guernsey had won the toss and decided to take push back, and Jersey’s captain, Analise Merritt, decided the Jersey team should play towards the rising sun, with it shining sharp and bright into their eyes. A cunning ruse to outsmart Guernsey and defy convention, which is to keep the sun out of your Goalkeeper’s eyes not have it shining into them. Basically, showing Jersey meant business and a “bring it on” attitude. Nothing was going to faze them.

The match started at pace. As demanded throughout this season, the Jersey girls were straight into fast play and were quick to apply pressure onto the Guernsey players and just as quick to transition between attack and defence to keep play moving at speed.

Within seven minutes Jersey were 2-0 up.

The first goal on 5 minutes, a coach’s dream, was a strike thumped from top right D into the bottom left corner by Olivia Labesse who had pounced on a poor Guernsey pass and drove 15 yards diagonally across the Guernsey defence into the D. What a goal and what a start.

Within 2 minutes, left wing Lottie James scored Jersey’s 2nd, taking perfect position on the left post to slide the ball into the goal after collecting a perfect cross smashed over by Grace Wetherall.

It seemed like this was going to be a seriously tough day for the Guernsey players. The Jersey team just didn’t let up. Up on the right wing, Grace regularly tormented Guernsey’s defenders with powerful and quick runs down the side-line and around into the D, backed up by Holly Griffin working tirelessly in right midfield. Over on the left, Olivia pressed and chased and won tackle after tackle before delivering passes to the high midfielders Chloe Lagadu and Lucy Brandie who were able to drive the ball ahead and into dangerous areas.

Unexpectedly, no further goals were scored in the first period (the match being played in four 15 minute periods), and although several further chances were created they were not converted.

The second period began as the first had ended with Jersey in full flow but Guernsey, driven along by their talented and rapid “no 5”, took charge. The Jersey defensive line with Analise in deep centre midfield, Daisy Carpenter, Mia Maguire, Phoebe Gorman and Izzie Byrom rotating their substitutions across the back were superb all game. They soaked up attacks, focussed constantly on the runners, channelled and harassed the ball carriers and of course knew where to play the ball onto the Jersey attackers after they had won it back. The rare occasion Guernsey got a shot away was safely covered by ‘Keeper Eliza Ostroumoff belying her young age with a very confident GoalKeeping performance.

As the second period ended, Guernsey were running Jersey ragged. Neil recognised the problem was down to his substitution strategy. Rotating 5 substitutes too regularly meant the team lost shape and cohesion. A decision to revert to the starting line-up to regain control paid off and right from the beginning of the third period Jersey were back in command.

Within 6 minutes, Jersey had scored another two goals to put them 4 up.

The first in the period was from Lottie James for her second of the game, again getting into an excellent position in the Guernsey goal area. She pushed the ball across the line after winning a scramble with the Guernsey right back and ‘Keeper. Within two minutes of Lottie’s goal, Grace deservedly slid the ball under the Guernsey ‘Keeper after some great work in the D.

The rest of the third period and the fourth period saw Jersey maintain control making numerous invasions of the opposition D, and with ever improving passages of passing play. Chloe Cutting, then working in right wing, caused numerous problems for the Guernsey left back, crossing the ball powerfully and dangerously for Caitlyn Cadoret and Theodora Caser to reach. Only good defending prevented them getting goals for themselves.

Notwithstanding Jersey’s pressure throughout the two last periods the Guernsey team certainly didn’t give up. They pressed and pushed and made chances of their own with the influential no. 5 doing her best to make things happen for herself and her teammates. It wasn’t to be. Emily Camacho working with the Jersey defence made sure that options down the line, for example, were few and far between.

The match ended with Jersey victorious and they regain the inter-insular trophy.

“The girls make up a terrific squad who all get on well with each other and that shows in their play. They want to work hard, run hard, and they want to support each other on and off the pitch. To see each and every player in the entire squad play with such determination, focus and energy is magnificent and the result today just shows that strength that they have as a unit. They have the next round of EH Cup matches in England coming up in March, so taking todays result into training for that will set them up perfectly” 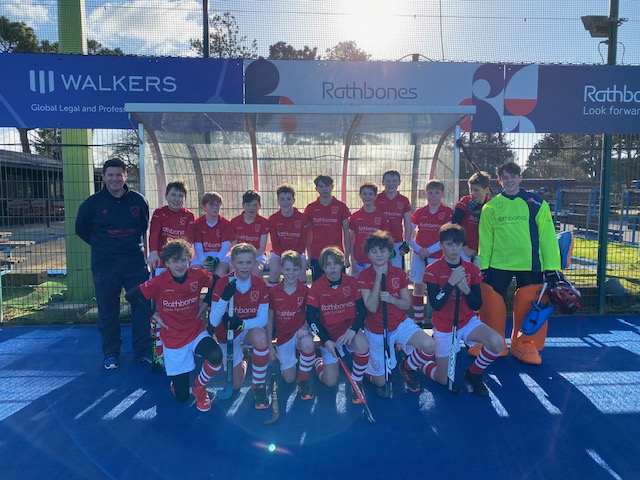 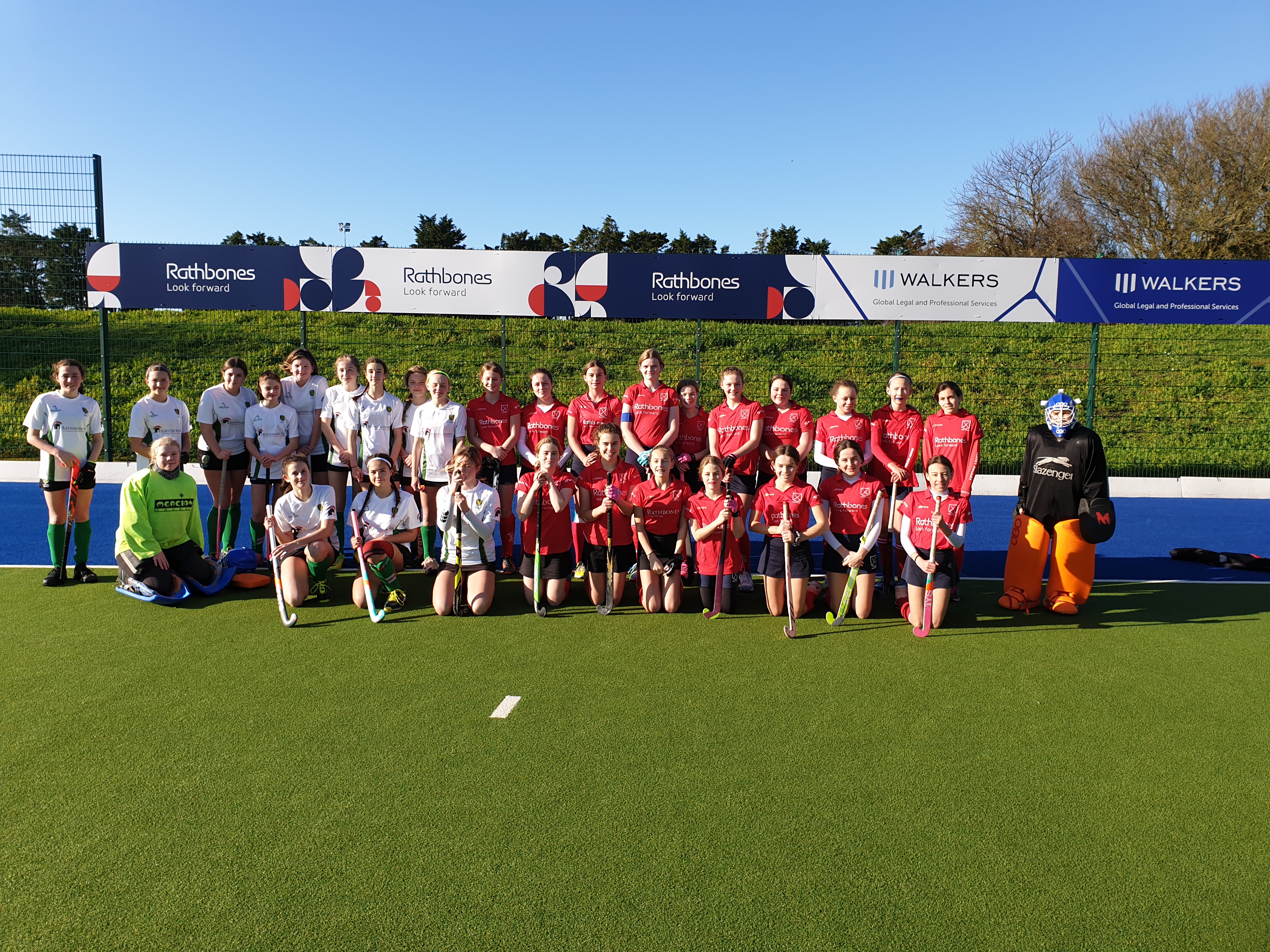 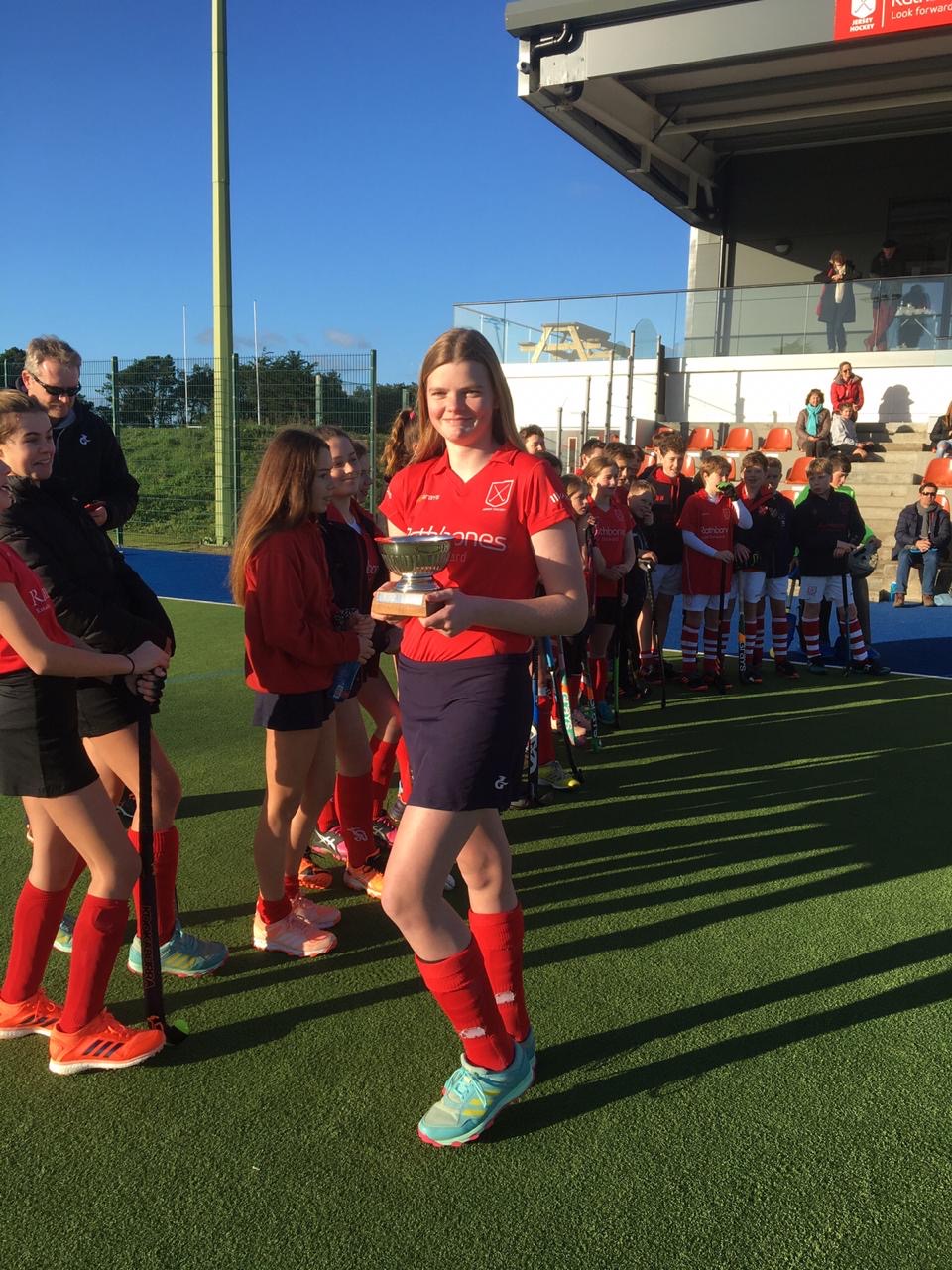 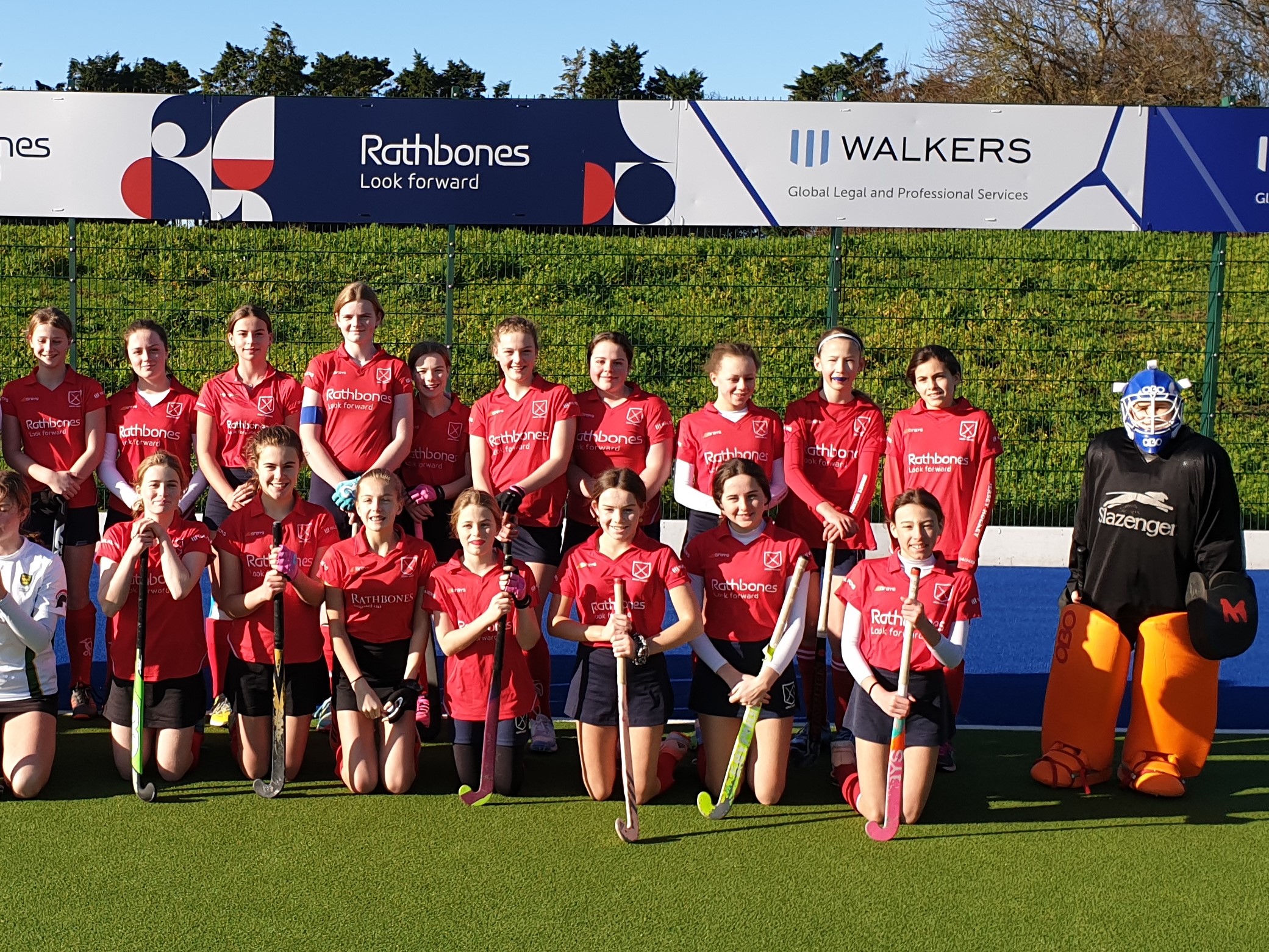 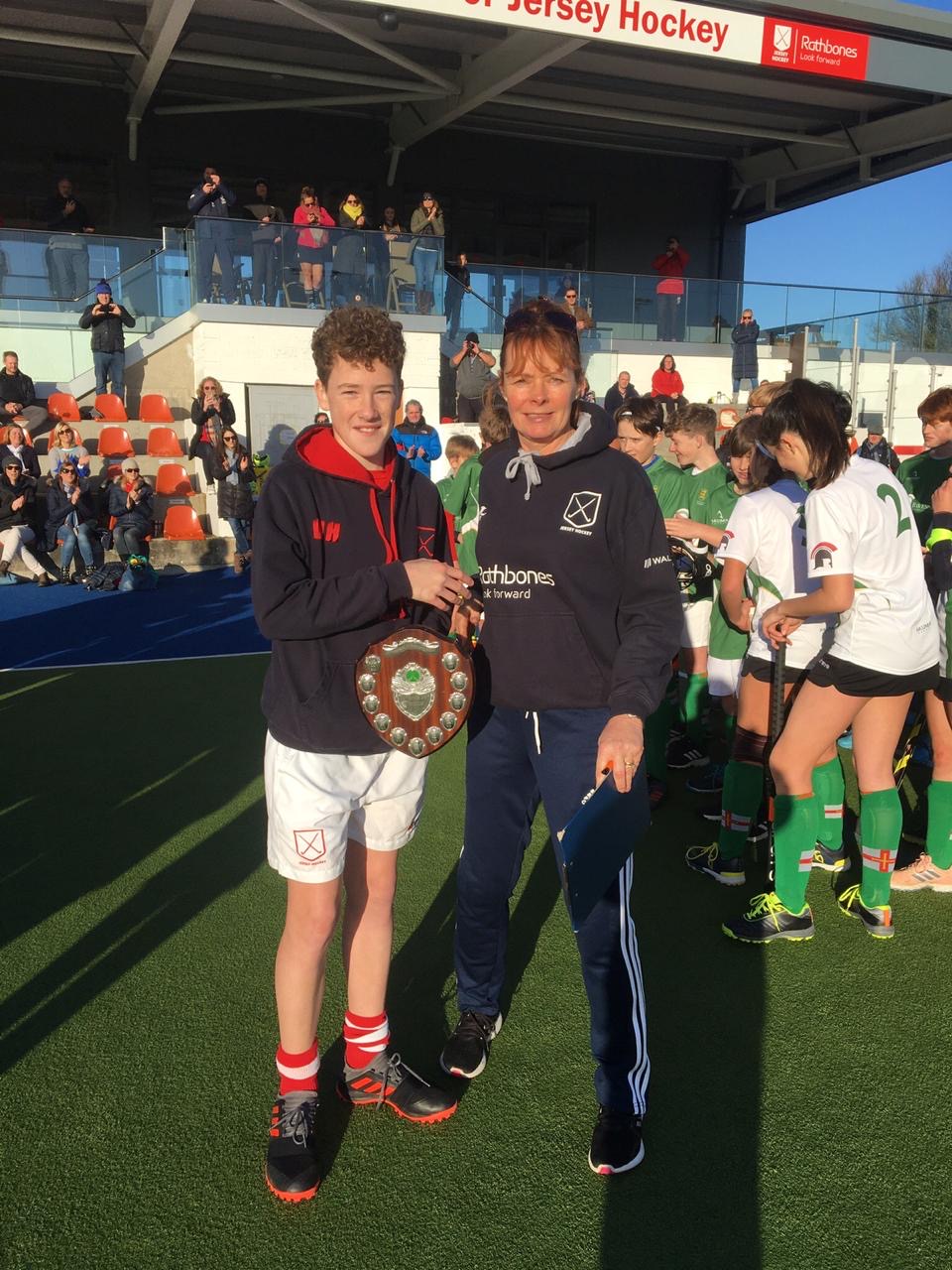 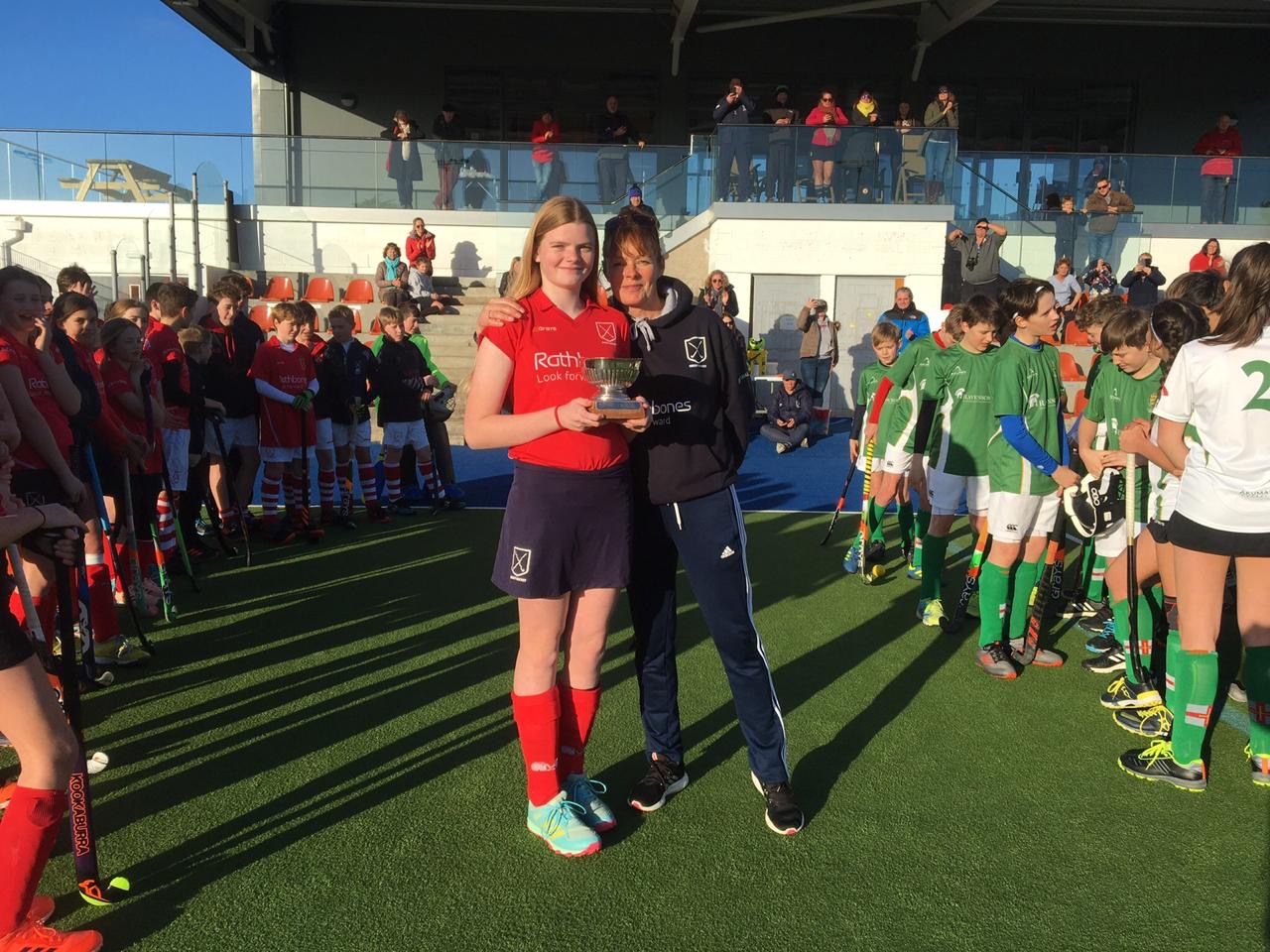