With three wins from three and sitting top of the Division, Rathbone Jersey Hockey’s U16s Boys travelled to Horsham on Sunday to complete their group matches.  With first or second place qualification to the South of England Area Championships still not secure, the boys knew that they could not afford to slip up in the two games against the teams just below them, both of which could still qualify themselves.

The Jersey side started with great intensity, playing with pace and skill and accurate and intelligent passing.  After Jersey keeper Josh Le Maistre had made a nice save from an early Horsham penalty corner following a rare break, Jersey’s intense pressure then opened the floodgates and after fifteen minutes Jersey were 4-0 ahead.  The opener was from Jersey’s first penalty corner when Blake MacRae’s flick had been saved, the Jersey attackers reacted quickest and MacRae and Charlie Reid forced the ball over the line, with the goal credited to MacRae.  Two minutes later the lead was doubled when the speedy and influential Reid flicked the ball home after excellent work from inside forwards Rusden Merritt and Jake Thomas.  Merritt, Thomas, Captain Ned Crosby and MacRae were dominating the midfield, winning balls with athletic tackles and distributing the ball to team-mates.

Further pressure to win the ball and then slick passing from Reid, Merritt and Thomas found MacRae free in the Horsham D and he slapped the ball into the net accurately for 3-0 immediately before Jersey’s fourth, from a deft Reid deflection of a powerful cross from Crosby.

Horsham then fashioned a couple of breakaways, and whilst the Jersey defence of Oli Flemmer, Robin Carnegie, Tom Healy and Harvey Pallent had been largely untroubled to this point, the home team managed to work a couple of opportunities which they converted.  The immediate reaction from the Caesareans was to snuff out any possibility of an unlikely further comeback and Just before half time the dominant MacRae completed his well-deserved hat-trick with a venomous shot from the top of the D into the bottom left corner.

The second half saw much of the same, with plenty of Jersey possession, with wing backs Freddie Pollard and Robbie Mossop were working hard to support the attack and feed the clever runs by strikers Ethan Toudic and Dylan Dunphy.  Jersey’s sixth came from a very well-executed and practised penalty corner called ‘Sneaky Post’.  Injector Crosby deceptively fed Thomas, whose powerful slap across the goal was perfectly deflected high into the net by Reid, who had completed his hat-trick with a perfectly timed run.

Jersey’s last goal was a wonderful piece of skill and came from a rapid hit into the Horsham D from the right by Crosby when MacRae, with the most exquisite first-time touch took all of the pace off the ball and wrong-footed the keeper at the same time.  The home side scored a late consolation goal as time expired after a bit of a mix-up in the jersey defence allowed a penalty corner to bobble over the line.

After a short break Jersey took on Brighton, who had proven to be difficult to beat from the results of their matches so far.  The reds absolutely dominated the match in all areas of the pitch and keeper Le Maistre did not touch the ball all game. That said, the Brighton defence, especially one of their centre-backs, and their keeper were terrific players and were very well organised.  The Jersey boys put in a very strong performance and worked hard to try and open up the Brighton defence but whenever they did create a chance either it was saved by the keeper or the attempts went wide.  Several penalty corners and numerous long corner routines were put into action as the paly-book was opened up and the coaches tried some formation variances but to no avail and Brighton held on for a share of the points.

These results mean that the Jersey Boys U16s team have won the Division and now await the draw for the South of England Area Championships in an attempt to retain the Area Championship.  If that can achieved again, then they will have the opportunity to repeat as winners of the National Playoff, won last season. Congratulations to old foes Guernsey, who also qualified for the Area Championships.

“Two really solid performances on Sunday have seen us unbeaten in the group.  The first was a show of how sharp our guys can be and how many problems we can give opposition.  The second was a test of how we can work out how to unpick a solid defence. Unfortunately, we didn’t take the chances that we managed to fashion but the performance was still very encouraging.”

“This group of boys are really starting to gel well together as a team and our domination of a decent Horsham side on Sunday was a joy to watch as a coach.  We now look forward to the South of England Area Championships, which we won last season with last year’s squad and some of these boys will have benefited greatly from that experience.  Entering competitions like this to give the boys a taste of what competing against good sides outside Jersey is like definitely helps their hockey development.”

Teddington started brightly, clearly possessing a number of talented players through midfield and up front.  One of their powerful forwards  began to cause the Jersey central defence of Samuel Hunter and Jack Stevens some problems early on.  He eventually demonstrated some good skill to find his way directly into the D calmly slotting the opening goal under the Jersey keeper, Archie Scate.  The Jersey youngsters reacted well.  The midfield of Joe Gower, Sam Watling and Will Hodgson worked tirelessly to wrestle back parity in the game and were rewarded with a couple of penalty corners.  The second of which resulted in Jersey getting back on terms with a nice piece of skill from Sam Watling after the corner broke down, smartly beating a couple of defenders and then the Teddington keeper.

After halftime, Jersey looked to keep the tempo high with the forwards, Ed Jeffries, Ben Heelis, and Theo Pirouet working hard to offer forward options.  With 5 minutes to go Jersey scored through a well worked short corner, deflected in by Sam Watling from Theo Pirouet’s pin point delivery.  There was drama at the final whistle as a penalty corner was awarded to the hosts.  Captain Will Hodgson stepped up, putting his body on the line, bravely blocked the drag flick allowing the jersey defence to clear and secure a great 2-1 victory against a good quality side.

Jersey had a short recovery before taking on the group leaders, Surbiton, who were playing only their first game of the day. Surbiton started brightly passing the ball accurately and quickly which opened up some scoring opportunities.  Archie Scate responded with a number of quality saves in the Jersey goal.  Surbiton, however, deservedly took the lead, albeit, through a slightly fortunate deflected drag flick leaving the Jersey defence with no chance. Louis Kelly and Patrick Filleul in the Jersey defence stuck to their tasks and repelled a number of dangerous passages of play.

After half time, knowing that they needed a result to progress, the forward line of Ben Heelis, Theo Pirouet and Joe Austin began finding space.  Sam Watling found the free running Ben Heelis on two occasions forcing the Surbiton defence into excellent last ditch tackles.  With time ebbing away, the best chance, however, started from Heelis himself, who found Pirouet through on goal.  The keeper was forced into a smart save and the resulting rebound fell nicely into Pirouet’s path but he was unable to find the now open net. A tired jersey team fought hard to the end and tested a strong Surbiton team throughout but eventually came up short against the deserved group winners.

The final fixtures of the group take place on 8th March 2020 with Jersey needing Teddington to beat Epsom!

Jersey under 16 girls side travelled to Chertsey on the 2/2/20 knowing a couple of wins were necessary if they were to progress to the next stage. With one of their opponents, Reigate, yet to play there remained some unknown opposition ahead of the fixture.

Jersey started the game the way the first half finished, in the opponents half. The Jersey girls were faster, played with greater purpose and more aggression than their UK opponents and took the lead after five minutes when Kate Jubb tapped into the net after a purposeful first run down the right hand side by Róisín Flynn resulted in penetration into the opponents D and a cross towards goal.

Jersey had plenty of the play and many chances throughout the first half but as halftime came, the scoreline was still just one nil.

Chertsey showed good strength of character and settled into the game better in the second half and with about 10 minutes to go Chertsey won their first short corner from which they produced their first attempt at goal - and what an attempt! With maybe her first touch of the ball, our goal keeper Ana Malta pulled off a great save to keep Jersey one nil in front.

The Jersey team rallied and continued to build on our possession resulting in another goal with five minutes to go. There was a goalmouth scramble and Olivia Labesse was there to turn in to the net from the right hand side. With the win secure, Jersey packed out our midfield and settled for the win.

Having come off the back of a win Jersey had to mentally put that to one side and concentrate on their next game which started just 30 minutes later!

Whilst Jersey started well our opponents from Reigate found their game pace it became clear we were up against very competent opposition. During the first half our defence was under siege, literally for our sweeper Holly Stearn who was pole axed in a forceful collision after 10 minutes and our midfield were needed to help out for most of the last 20 minutes with Ana been called upon time and again to make saves.

Half-time arrived to some relief allowing the coaches to change the shape of the Jersey team strengthening our midfield. We knew that a goal for us and the same stoic defending would give us what we needed. In the second half the balance was much more in our favour as the tactical changes paid off and Jersey went one nil ahead from a Grace Wetherall goal after a short corner eventually broke to the left before a Chloe Lagadu shot rebounded to Grace who kept her composure  and struck the ball home.

Within five minutes Reigate came back by scoring a short corner with a straight strike to the bottom left hand corner but in a pulsating second-half Jersey immediately responded after a long ball played by our midfield was maybe unwisely kicked by their goalkeeper but picked out by the energetic Sophie Davies who controlled the ball, moved into a scoring position and slotted home.

With nine minutes to go the game was end to end but regrettably Reigate kept punishing Jersey with short corners. The home team had learnt to slip the ball to the right and take a straight shot and unfortunately Jersey conceded a second and then third goal to the same routine. Jersey attacked strongly in the last five minutes we were unlucky not to score with Izzy Heelis showing her skills beating a number of defenders leading to a short corner which was saved well by their goalkeeper.

The Jersey girls did themselves proud but eventually run out on the wrong end of a 3:2 score line which will mean Jersey under 16 girls will likely end the season with their inter insular against Guernsey on the 7th March.

We are grateful to our sponsors Rathbones and Walkers for supporting Jersey Hockey. 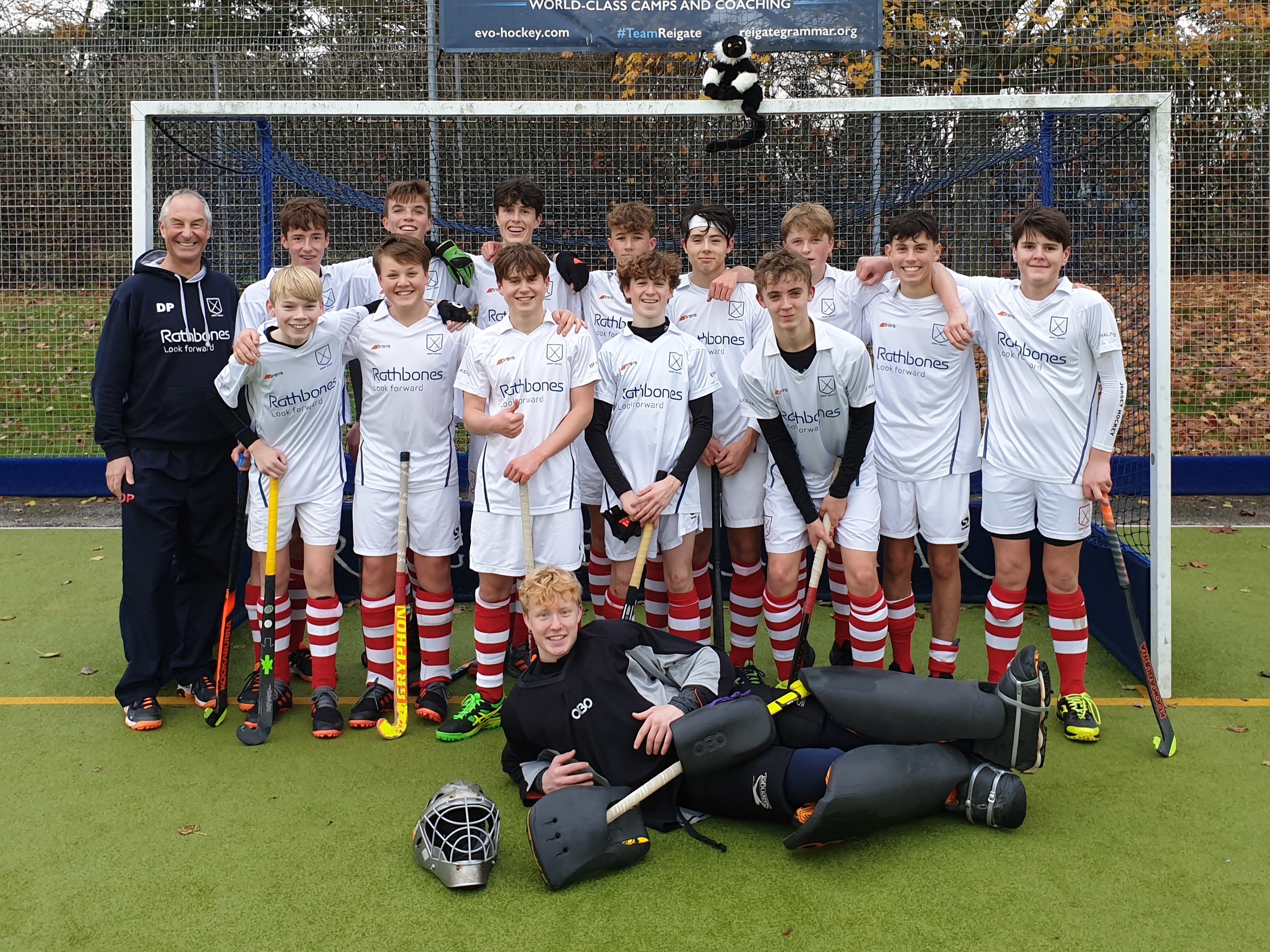 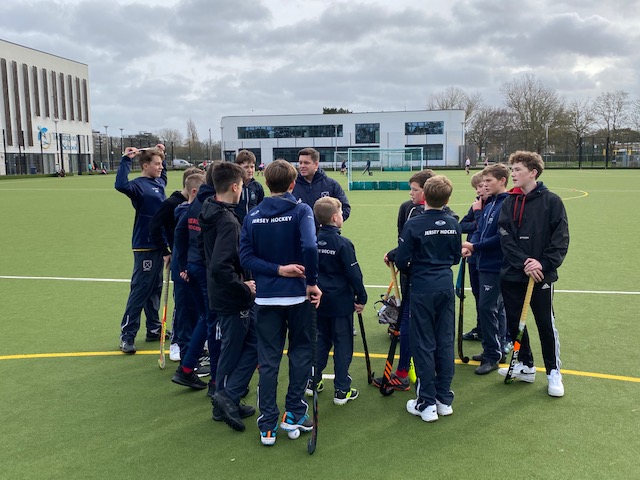 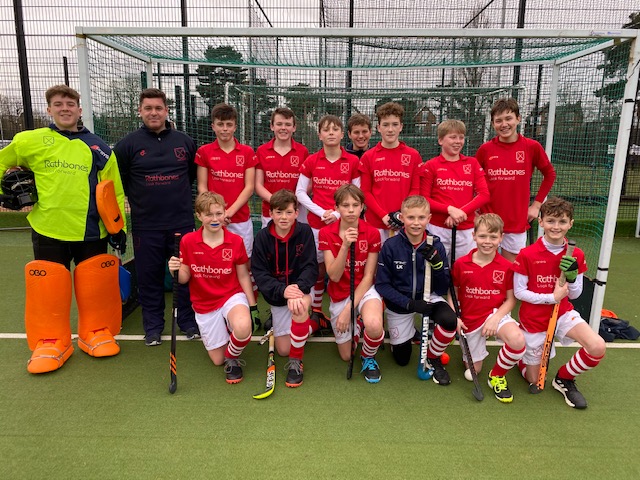 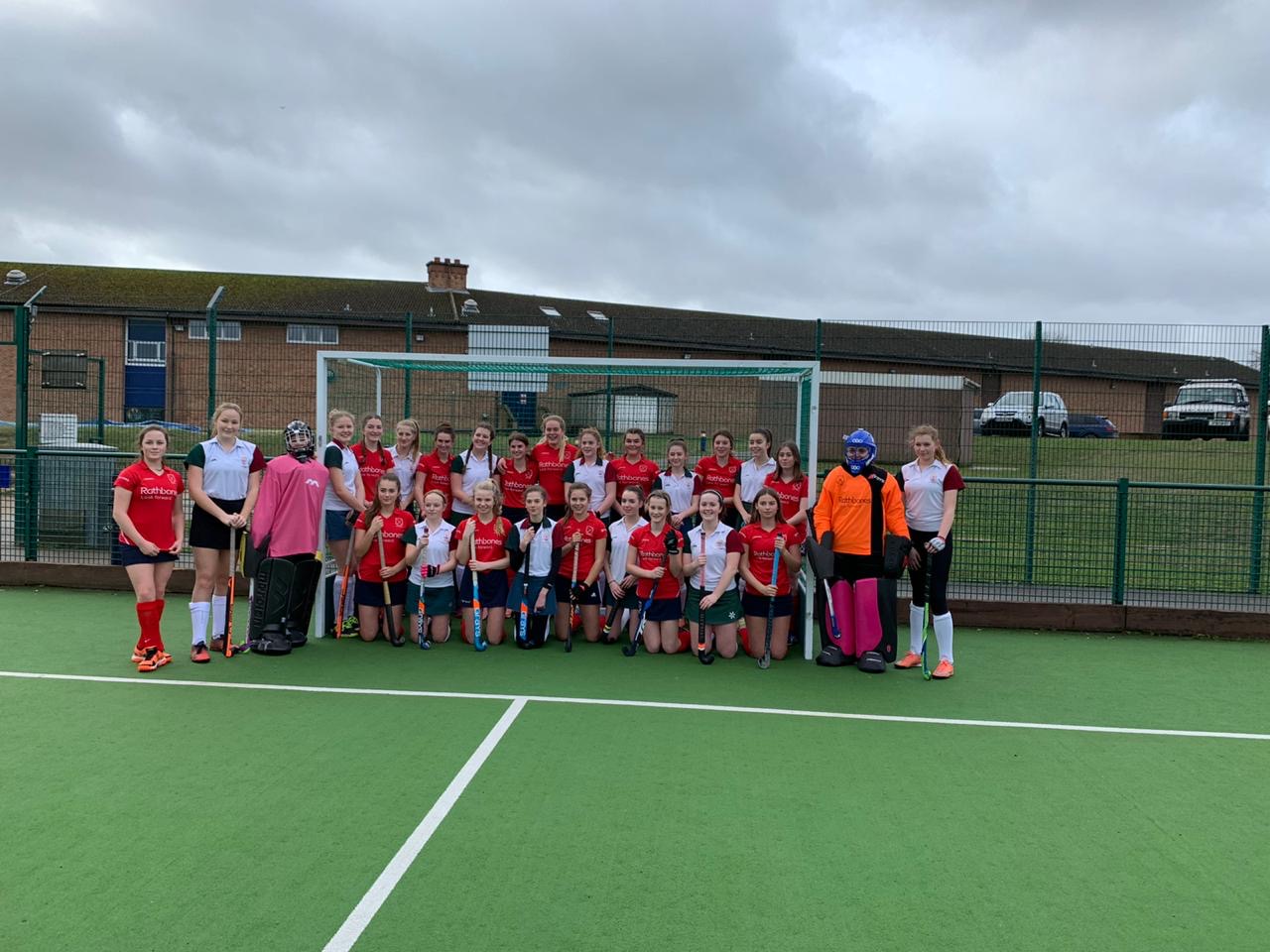